So let’s talk a minute about wine pairings. Anyone who has ever had a glass of wine in their life has probably at least heard about them, or contemplated them. Those of us who take wine a little more seriously, which probably includes anyone reading this blog, know quite a bit about them. In today’s effort, I want to tell you about one of the most perfect pairings I have ever produced. And it was just a little recipe at lunch yesterday.

But we’ll get to that….first, the supermodel.

Yeah, she’s kind of fetching, isn’t she? And she fancies herself a bit of a cook. And she is married to Uber-hunk (if you are into that sort of thing) John Legend. And she has written two cookbooks (so far). Oh, and if you aren’t following her on Twitter, you are missing out. She is hilarious.

I know what you are thinking….first, who the Hell buys cookbooks anymore when there are approximately 1.9 billion free recipes on this thing called ‘the Internet’?

Well, from time to time, you find a special one, and these would both qualify. I know, I know, she’s a supermodel, she can’t eat real food, right? She’s probably produced a “diet cookbook” full of kale and quinoa and other stuff that somehow qualifies as food these days.

Uh-uh. Real recipes, and some pretty great ones too. One of the best potato salads I have ever had. Definitely the best grilled cheese sandwich on the planet. And so many more.

Oh, and if you like Thai food, her mother is a crazy wicked Thai cook, and each cookbook has a section specifically for those recipes.

For lunch yesterday, I made this:

Spicy Jammy Drummies (this is someone else’s picture) 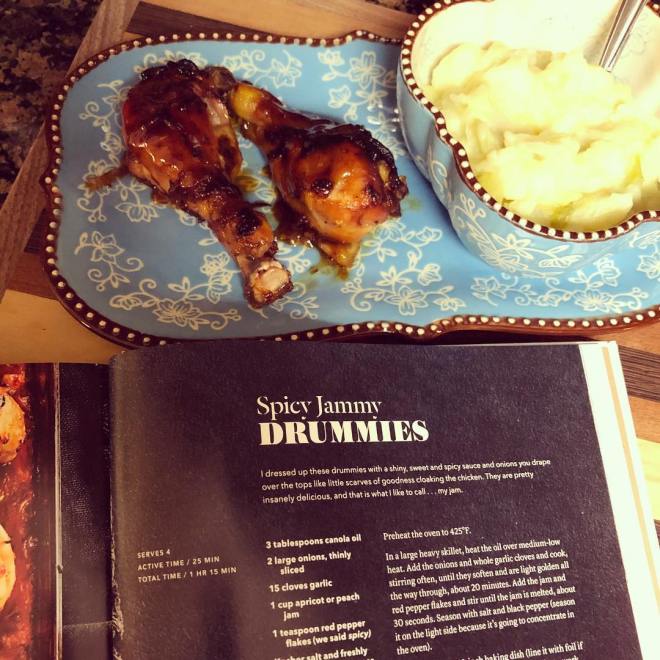 Insanely good. And the sauce would go with almost anything. Any kind of chicken, and probably any pork too. Ham? Oh yeah! In fact, the sauce was so good that next time I will DOUBLE it, so that my chicken is even more gooey and decadent.

And the wine that paired PERFECTLY with it? Here it is.

Pairing food and wine is a passion of mine, and sometimes I get it right, sometimes I miss horribly, and then, occasionally like yesterday, I freaking nail it. And it’s awesome when that happens!

Next up in the blog, a ton of more random stuff to tell you about. I’ll get at least one blog post done this weekend, and then I’ll be silent for a little while as we spend most of next week at the Vancouver International Wine Festival! Can’t wait!