7:45 AM – Oh man, this is early given what time we got to sleep last night. Dinner was close to 5 hours, so it was after Midnight by the time our heads hit the pillow. Anyway, we need to be up early today as this is our only visit to Hollywood Studios this trip, and we need some time to hit up Star Wars: Galaxy’s Edge. Also, we have not been here since Toy Story Land opened, so we have lots to get done.

Oh, and it’s still pretty cold this morning. The cast member at the bus stop is dressed in full “Nanook of the North” gear. Toque, scarf, gloves, the whole nine yards.

Our bus arrives and we are through security and into the park 20 minutes before it opens! We rule!

Sadly, there are about 1500 people who rule much better than we do, and we cannot even see the front of the crowd waiting for them to drop the rope so we can all stampede to each of the two new lands.

The cast members are incredible. Since it is, no exaggeration, a stampede to the Millennium Falcon: Smuggler’s Run ride, they create a human rope line, keeping everyone from running over each other and herding us in an orderly fashion to the ride.

The theming of this land is second to none. If it were not for the number of guests wearing Disney apparel, it would be completely reasonable to believe you had actually transported to a planet in a galaxy far, far away.

The posted wait time for Smuggler’s Run is 80 minutes but it takes us, maybe, half of that. So efficient.

You are put into a group of 6 people, and the 6 of you have to fly the Millennium Falcon on a mission. Two pilots, two gunners, two engineers. Tracey and I had the misfortune of being the engineers, at the back of the ship. Our crew? One lady and her three young grandchildren. Suffice it to say we did not do that great, considering that our gunners were probably 12 years old, combined.

I loved the ride. Tracey made some good points that your attention was often distracted by having to press buttons as part of your duties on the ship. It might have been better if they had put the buttons in front of you instead of to the side.

Either way, I was thrilled.

Up next, over to Oga’s Cantina for a bite and drinks. Their food menu is very limited in the morning. We both had cinnamon buns. I could not resist the Blue Bantha (blue milk) made famous early in the Star Wars series. It was actually really good, although it tasted little like milk. 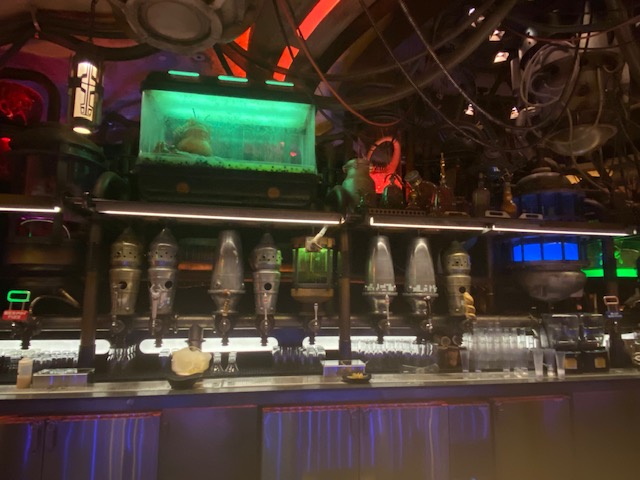 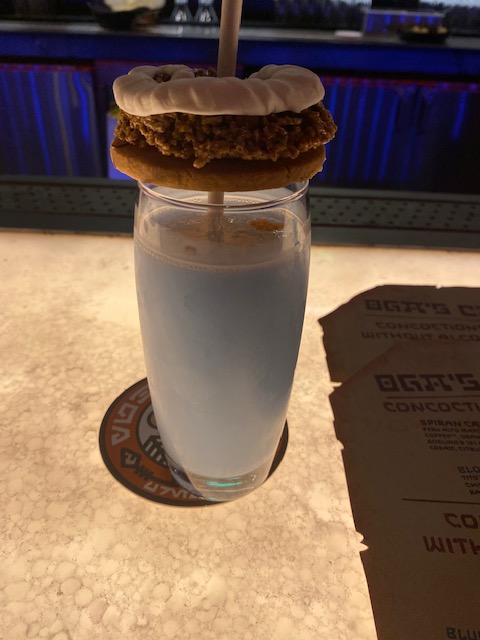 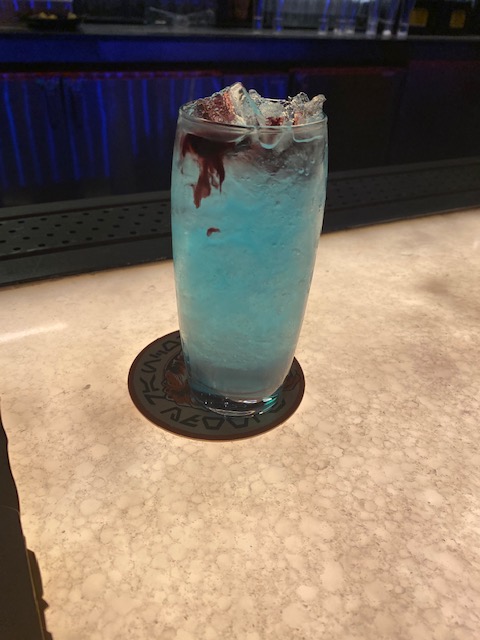 A very cool experience. They have gone all out to make this land everything it can be.

Some other random theming in the land: 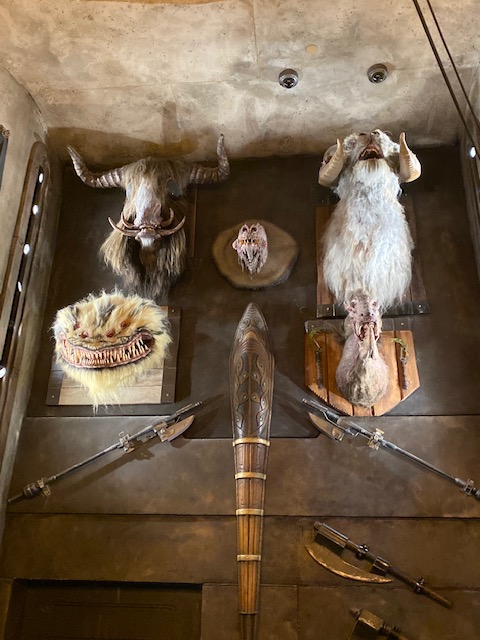 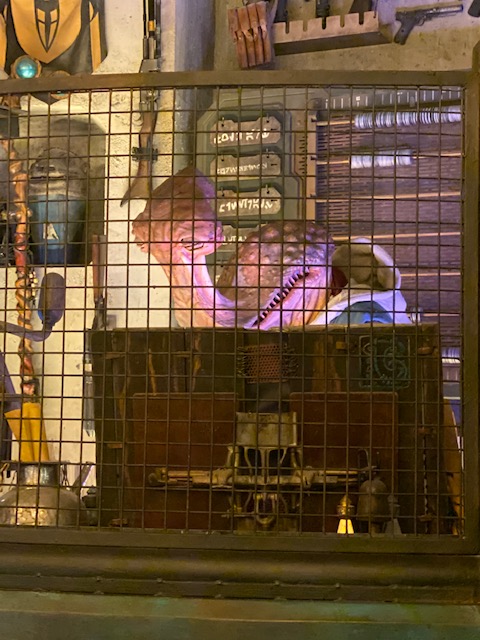 On our way out of the land, we walk by the entrance to the upcoming E-Ticket ride, Rise of the Resistance. It opens on Walt’s birthday, December 5th.

We leave here on November 29th.

That is hard to take.

They are testing the ride, I can hear it from beyond the ropes. It’s killing me.

We have a Fastpass for Toy Story Midway Mania, so we head over to Toy Story Land. I know that today is going to be a short day, as my wonderful wife is in a tremendous amount of pain. She is doing her best to not disappoint me, but she forgets that I am more disappointed in her being in pain than I ever could be in leaving a theme park early.

Anyway, we get to the ride and we begin the competition. Dean (Green) and Tracey (Yellow) in a toy battle to the death.

That seems like a pretty great place to end our day, so we head down Hollywood Boulevard, do a little shopping and take a couple pictures.

As we head out of the park, Tracey is struggling to walk. Thankfully our bus pulls up just as we get to the stop, and we get to sit down and enjoy a relaxing trip back to our resort.

We both start to grin as we turn the corner and the hotel comes into view. It is just so beautiful, so impressive, it is hard not to be excited every time you walk through the doors. So incredibly special. Love this place.

As the bus approaches the stop, we come to a sudden halt. A kid has run out in front of the bus. Some parent lost control of her kid at a bus stop. Thankfully the bus driver was on the ball and there was never any chance of an incident.

As we get off the bus, we notice it is just one woman, with four kids, ages between 2-7 (or so). Perhaps she was trying to cull the herd a bit. Good grief. One parent, four young kids, at Disney. The Seventh Circle of Hell, right there.

2:00 PM – Tracey hops into the bath to rest her aching joints while I update the blog. She is so tired, after the bath it’s time for a nap.

4:30 PM – Time to wake up the wife who is going to do a “Mini-Process (TM)” to get ready for our dinner at Citrico’s, the other fine dining restaurant in the hotel. This is a more traditional restaurant, no tasting menu, just a la carte.

Citrico’s has a world famous wine list, including many eclectic wines by the glass, and even by the ounce. This is gonna be a pretty cool evening 🙂

5:30 PM – We arrive at Citrico’s, a very nice restaurant but about 3 notches below V&A’s from last night. The star of the show here is the wine list, not only a spectacular list of bottles, but a great list by the glass, and even by the ounce.

OPUS ONE BY THE OUNCE!!!

This is gonna be expensive.

We start off with a nice celebratory bottle of Champagne. Kind of Dom’s little brother. 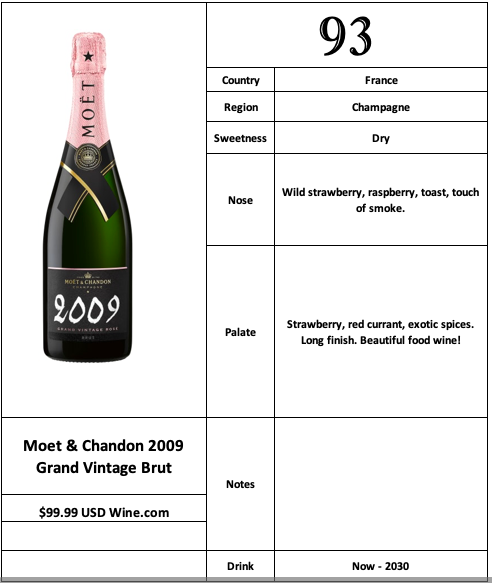 We are both hungry, and figure that we can both handle an appetizer and a main. Of course, we forgot about the size of the portions in the US. 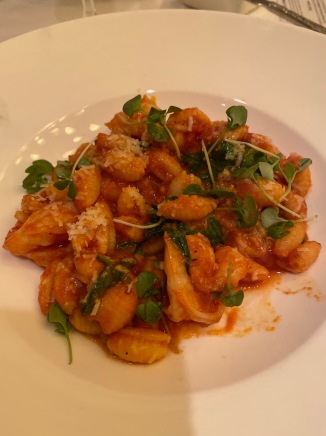 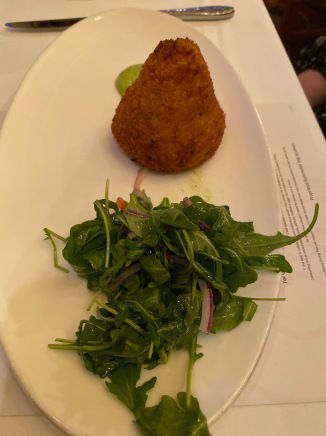 After these delicious but filling appetizers, it was time to start in on the “by the glass” menu of wine. Tracey was busy finishing up the Champagne, but I ordered a lovely little Chardonnay. 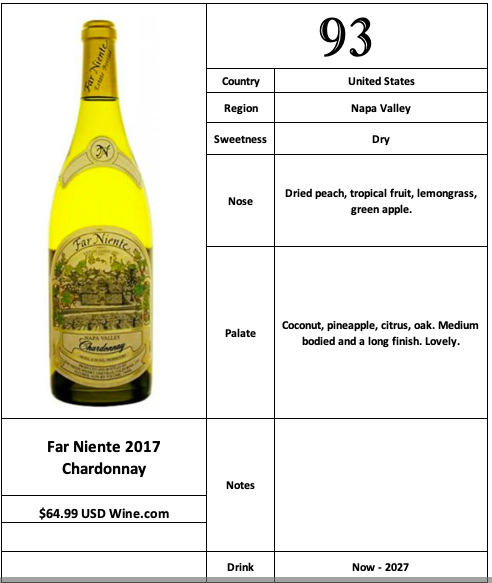 About now it was time to order our main courses, and the wines that would pair with them.

With my dish, the Filet, I decided not to screw around and go right to the big boy. 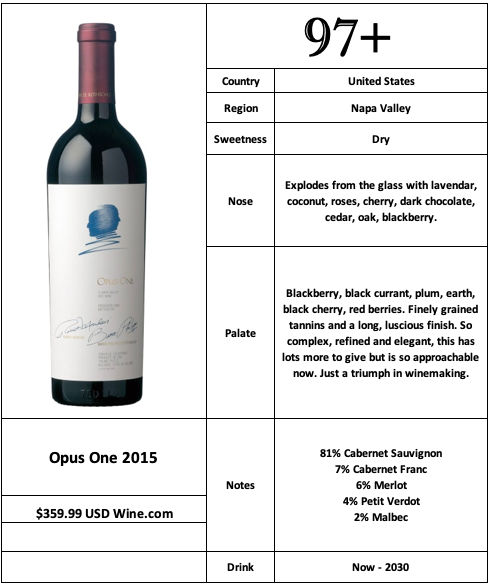 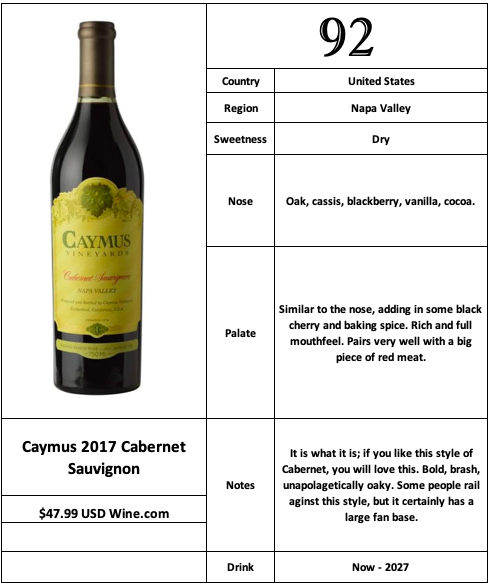 I felt bad for ordering such a classic wine, so after my Opus was gone, I scooped her Caymus and ordered her a glass of Opus to enjoy.

Both of our meals were very good, but nothing particularly memorable. Too much food, for sure. Neither of us could finish.

They had two more Chardonnays on the list, so we ordered a glass of both of them so that we could have a little three-way comparison (I had not finished the Far Niente yet). Three quality wines, but very, very different in style. 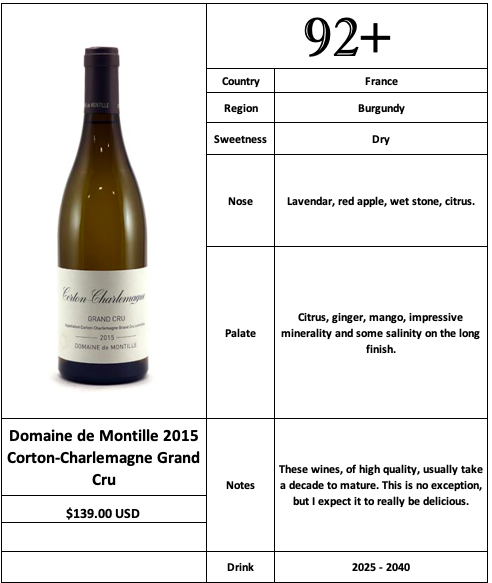 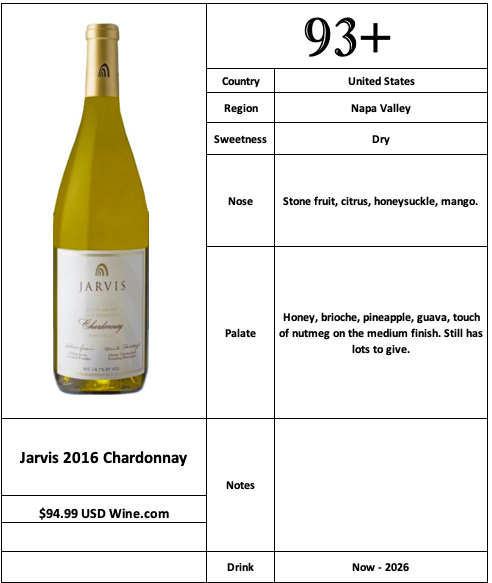 I guess they don’t often get guests going this nuts on the ‘by the glass’ menu, so the restaurant Manager came to our table to thank us and chat about wine for a while. He gave me his card and made a few off-the-wine-menu suggestions for our next visit. Very cool.

8:15 PM – Back to our room to unwind and watch Monday Night Football. Tomorrow we sleep in a little bit before our breakfast reservations, and will hang out at the pool or do a little shopping in the hotel. It’s a late afternoon park day for us tomorrow, as we head to Disney’s Animal Kingdom for our first experience in Pandora, the World of Avatar!