7:05 AM – I’m up and head out to our balcony for a little morning Zen. This is the first day this trip that it has been pleasant enough for my morning ritual; one little issue this morning, though, is that the sun is right in front of our balcony, making it impossible for me to read or even relax with it shining right into my eyes. Sigh. First world problems.

8:30 AM – The wife is up and getting ready to head downstairs to 1900 Park Faire for our character breakfast.

9:10 AM – They take us in, right on time. We see a handful of characters. Pooh, The Mad Hatter, Alice, Mary Poppins…and Tigger. It is explained to us that Tigger is “extra bouncy today” so he is not making the rounds; he is, instead, off in an alcove where we can go and get a picture with him after breakfast. We do, of course. 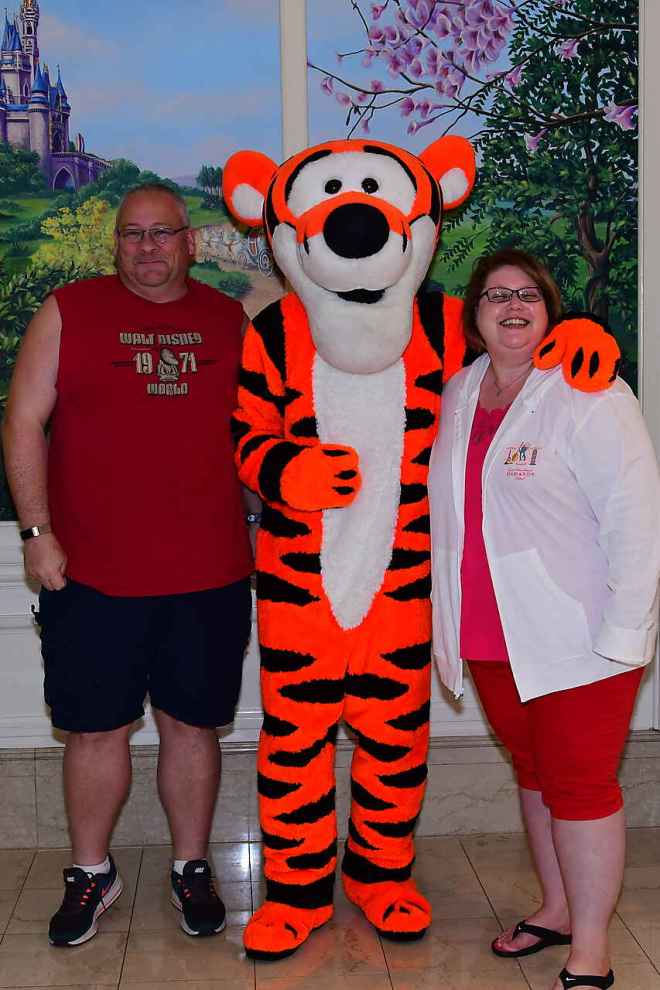 The buffet itself is fine. Honestly, it’s below Disney’s normal standards. Nothing special.

We only get to see one more character, as we got a bit unlucky with our seating and they had just moved past us. We could have stayed longer to get them all, of course, but we were finished eating and it wasn’t that important. 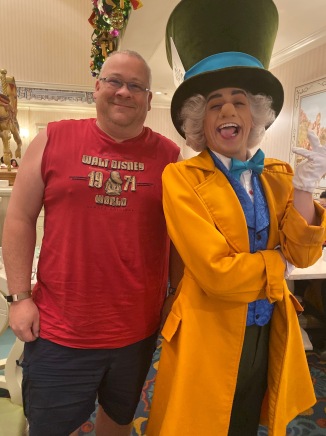 Was this guy ever in character. He spent about three minutes with us, spewing illiterate gibberish. Mad as a Hatter, for sure!

So, this, folks is a Gingerbread House. Gingerbread. Big enough to hold two employees inside it, selling off Gingerbread and other treats. The flowers and accompaniments on the house are all icing. 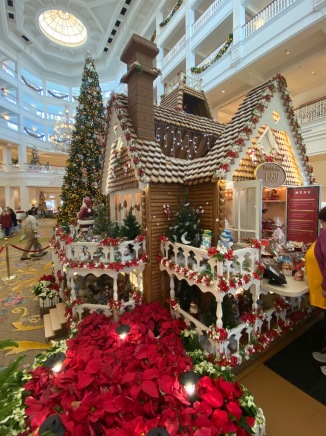 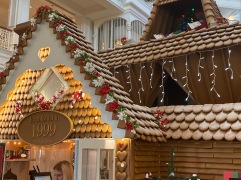 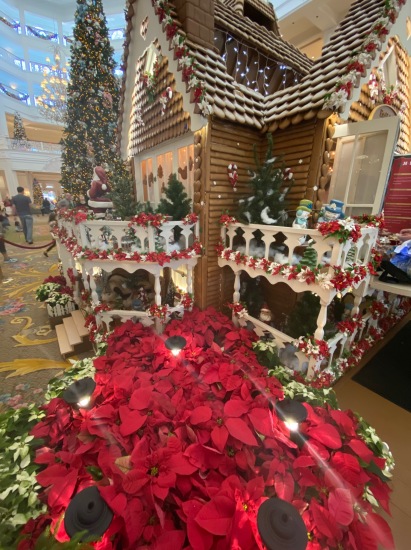 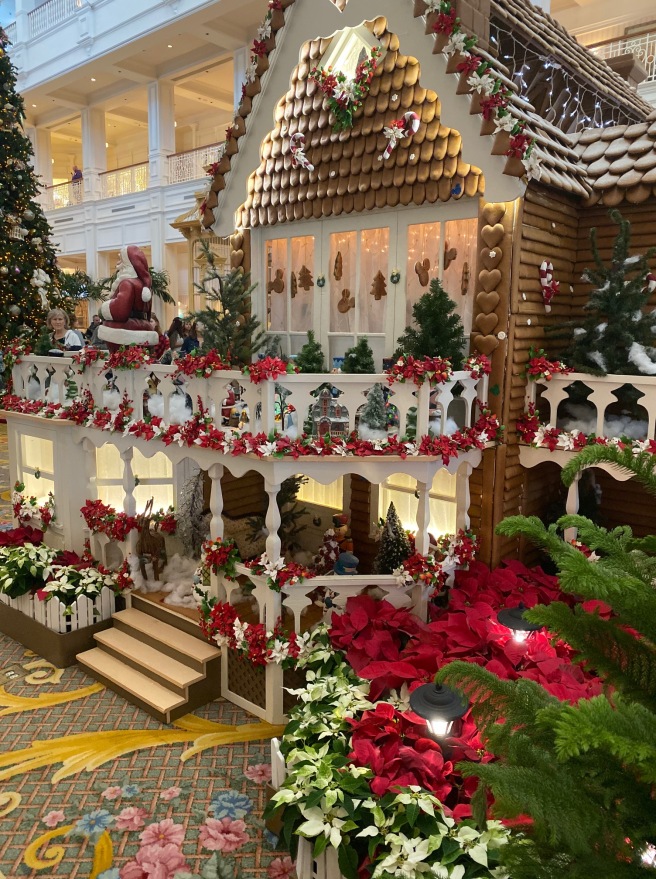 Oh, and you see that giant tree behind it? 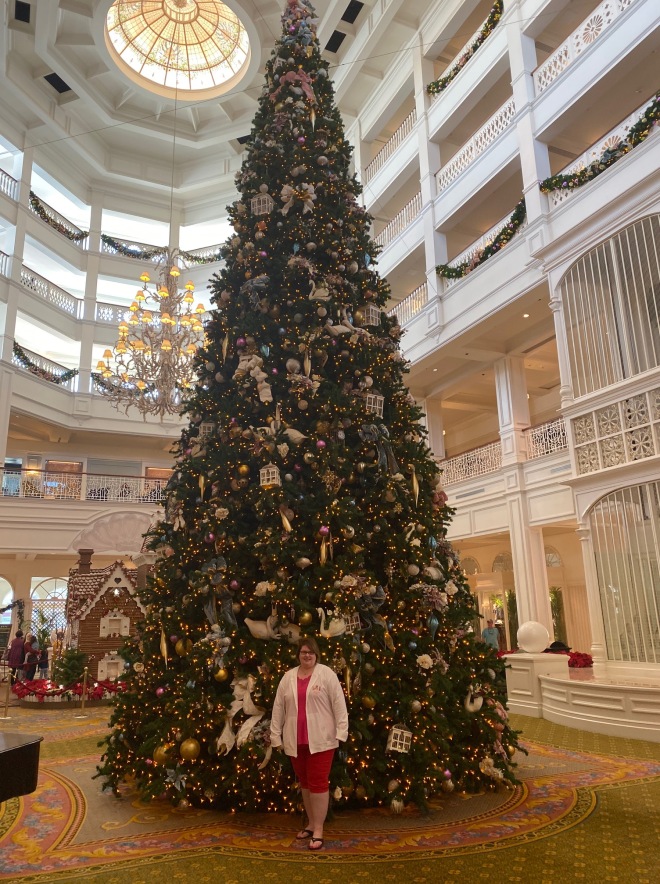 This tree was NOT HERE when we left Citrico’s last night. Man, those were some busy Elves overnight.

After a little shopping in the shops in the hotel, it’s time for a little rest before our busy park evening. Very excited to get to Pandora and check it out. We aren’t going on the #1 ride today – that happens in a couple days – but we are going to spend some time in the land, taking it in, and going on the Na’vi River cruise.

2:00 PM – Since we are going to need a bit of sustenance in advance of our 7:30 dinner reservations, we head down to our Club Level for snacks. They have lots of good stuff, highlighted by some spectacular vegetable soup. Yesterday’s soup, Italian Wedding, was equally fantastic. You know, we just don’t eat enough soup.

3:00 PM – We are off, back to the bus station for the ride to Animal Kingdom. It is almost a half hour ride, so hopefully we get a couple of comfortable seats!

It’s almost a private charter as there are only 3 people on the bus to the Animal Kingdom. Lots of great photo opportunities on the way into the park, as Xmas has come to the Kingdom in a big way.

So, over to Pandora. It’s pretty cool in the daytime, but a whole new world once the sun goes down. 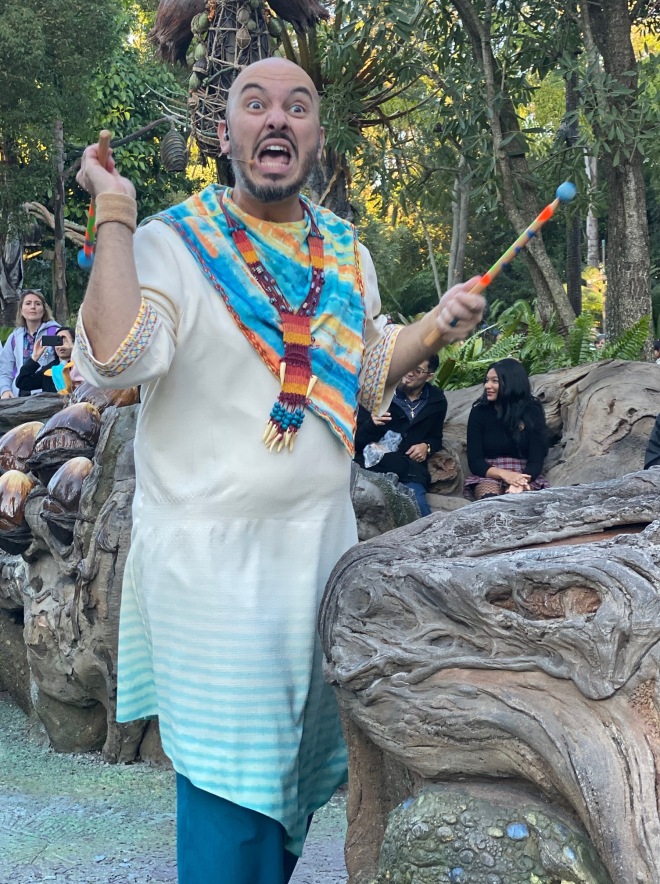 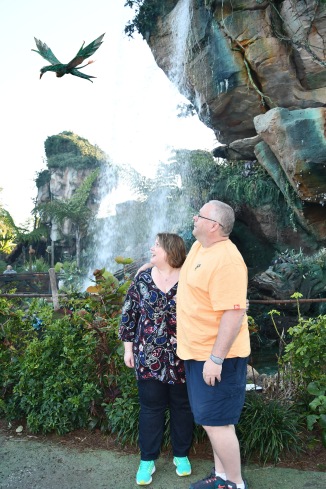 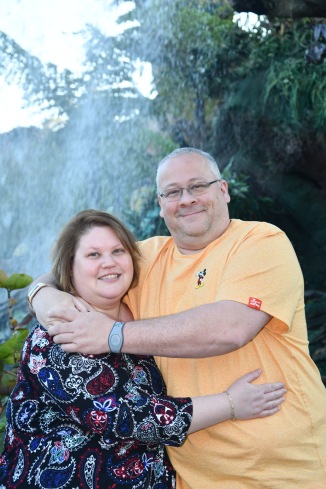 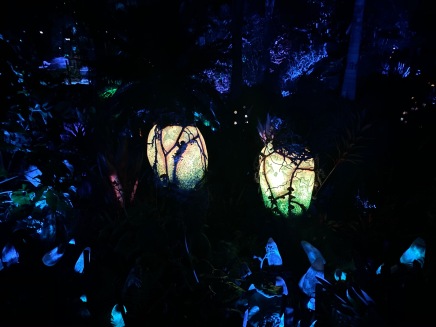 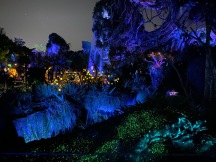 They have done an amazing job on theming this land. Look, it’s not Star Wars, for sure, but it’s impressive.

We didn’t get to the big E-Ticket ride tonight, that comes on Thursday. But tonight, we took a ride on the Na’vi River Journey which was gorgeous. A slow boat ride, a la Pirates of the Caribbean, but in the world of Avatar. Impressive.

We head to the newly-build auditorium to watch the Rivers of Light, a new show combining water, projections, and music. It’s nice, kind of a “Poor Man’s World of Color”.

By the time this show is over, I am freaking cold. Shorts and a T-shirt were great while the sun was up, but now it’s not enough. Gotta buy a jacket of some kind before spending tomorrow night at Epcot.We had dinner reservations here tonight but when we looked at the menu, it was not very Tracey friendly. I am sure when we had booked this, she was looking forward to the short ribs; but she had short ribs last night, and even my wife can only eat so many short ribs. We cancelled these reservations, and just grabbed some pizza to fill the void for now.

And on the way out, some of the same photo ops, with darkness to add a little gravitas. 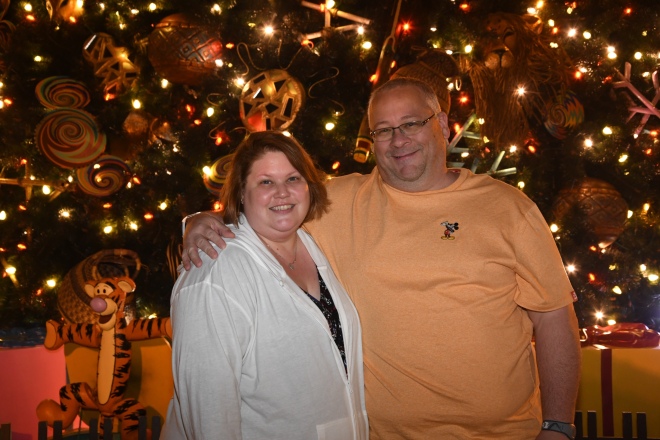 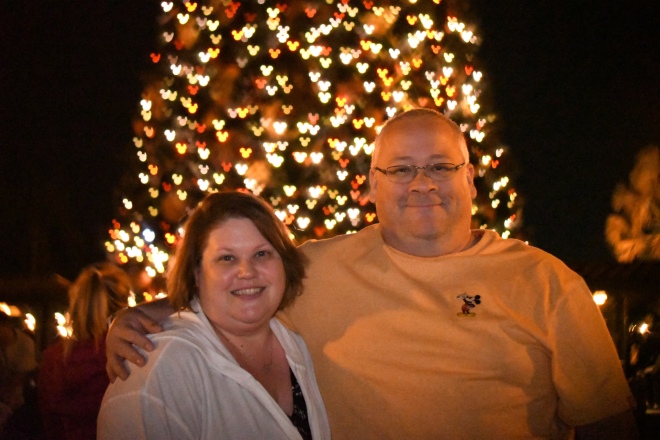 8:15 PM – Back at the hotel and we head upstairs to Enchanted Rose, the new Beauty And The Beast inspired lounge that just opened up last month. So beautiful. Oh, and wine. Did I mention wine? As if last night’s by-the-glass menu wasn’t enough, this one blows it away. 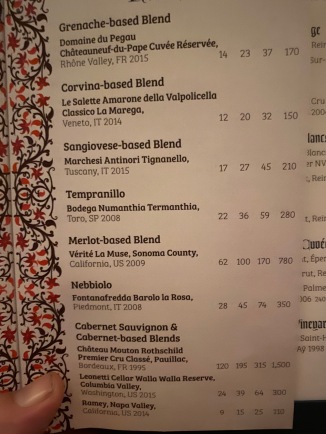 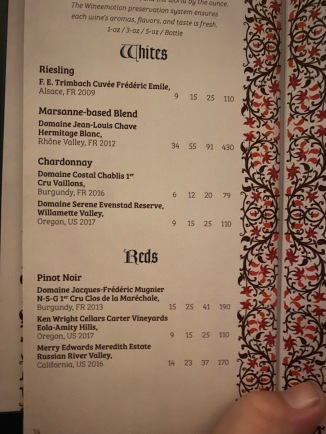 Yes, you are reading that correctly. That is 1995 Chateau Mouton Rothschild by the glass. Hell, BY THE OUNCE. First growth Bordeaux by the ounce. I am just going to move in and have my paycheques signed over to this lounge. $310 for a 5-ounce glass.

NO, I did not order that.

Tracey orders a 2015 Tignanello, which we have previously had and loved, and I order the Barolo. We have a cheese plate as an accompaniment, because only a lunatic orders a Barolo to sip without food.

Hmm, Tracey is not as over-the-moon about the Tignanello as she should be. I get up and go check out the bottle, and it turns out it is actually 2016! Well, the ’16 is also supposed to be really great, but it falls a bit short of the spectacular ’15.

Interesting fact: Apparently I (and everyone I know, and all the wine experts that I know at stores in Vancouver) have been pronouncing it wrong all along. Our waiter tonight pronounced it Teez-a-nell-o. I was preparing to mock his absurd pronunciation, until he explained that he got that pronunciation from the buyer of the wine who got it from the winery family themselves, so I am going to assume they know how to pronounce it. At this point, I go to the Googles to confirm that I have been wrong all along, only to find out that, according to the internet (which is never wrong), that we are BOTH wrong and the G is silent, and it should be pronounce TEEN-YA-NELLO. Alrighty then. Maybe I’ll just start calling it “that Tig wine”. 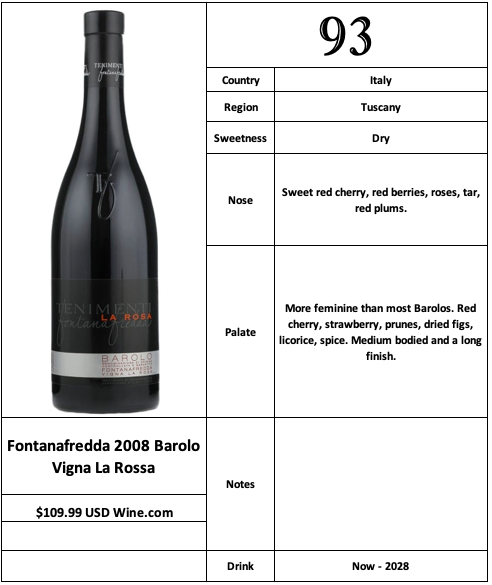 On the way back to the room, we stop at our Club Level to see what they are pouring at “cordials” hour. Tracey grabs some Bailey’s. I ask about the wine, and yes, they have wine. And it’s good wine, and it’s free. Jesus we could have saved a bunch of money if we had just come here first! LOL.

That’s it for tonight. Tomorrow, we sleep until we sleep, we nap when we nap, and we pool when we pool. Tomorrow is supposed to be the nicest day of the week so we are going to take it easy and enjoy the hotel during the day, before heading back to Epcot for evening festivities.